The Gender Pay Gap: Your Guide To What It Is, How It Affects You, And What You Can Do About It - FL
× Close

It’s been in the news, all over social media (you can’t have missed the hashtags #GenderPayGap #PayMeToo #EqualPayday), and you’ve probably discussed it with your colleagues. But what exactly is the gender pay gap? Is it the same as unequal pay? How does it affect you? And what can you do about it?

First things first, the gender pay gap is NOT the same as unequal pay. Put simply:

The gender pay gap is not the same as unequal pay which is paying men and women differently for performing the same (or similar) work. Unequal pay has been unlawful since 1970.

For more details, take a look at this resource from the UK government: Gender Pay Gap Explained

The UK is one of the first countries in the world to introduce gender pay gap reporting and all companies with 250 or more employees (around 9,000 firms in total) have been mandated to calculate their gender pay gap and publish it on a government website. The deadline for reporting was 4th April 2018 for the private sector and 30th March 2018 for the public sector.

Well, the results are in, and it turns out that the UK has a national median pay gap of 18.4%. But what does that mean?

The official explanation is that if you line up all the men and women working at a company in two separate lines in order of salary, the median pay gap will be the difference in salary between the woman in the middle of her line and the man in the middle of his (calculated on an hourly basis and including both full-time and part-time workers).

What it actually means is that as a whole, the UK’s female workforce is paid 18.4% less than the male workforce.

And how does the UK compare with the rest of the world? Pretty disappointingly.

The UK gender pay gap is higher than the average of the 35 OECD (Organisation for Economic Co-operation and Development) countries, which is 14.1% (the range varies from the gap in Costa Rica being just 1.8% to the gap in Korea at 36.7%). The country with the lowest gender pay gap in the EU is Luxembourg with a gap of 3.4%.

Within the UK, no sector is immune, but not all sectors are equal. Unsurprisingly, the biggest gap has been reported within the finance sector (an average of 35.6%).

Forward Ladies is delighted to share that one of our key clients and sponsors, Yorkshire Water, has a 4.7% median gender pay gap, and said that, on average, female employees receive a higher bonus than their male colleagues.

Richard Flint, Yorkshire Water’s chief executive, has stated that “Although our gender pay gap figures are significantly below the national average, we are in no way complacent with our current levels of gender diversity. We want to properly reflect the communities we serve.”

What may shock you, is that just because a company has been voted a “great place to work for women”, it doesn’t mean that there are no issues with pay for the women who work there. 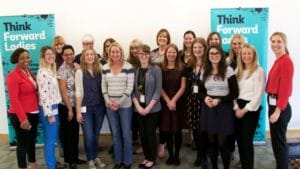 The Guardian reported, that almost half have a gender pay gap higher than the national average, and of the subsidiaries of companies included on the Times Top 50 Employers for Women list in 2017, more than nine in 10 pay women less than they pay men on average.

There are many reasons as to why this huge disparity in pay between the genders has come about. Women are more likely to be the ones caring for children and elderly relatives, meaning that they are more likely to be working in part-time roles, which are often lower paid. Women are also more likely than men to work in lower-paid and lower-skilled jobs. Discrimination is, of course, another cause (source: The Fawcett Society).

When you look at the data from high-street fashion retailers, where in some companies women make up more than 90% of the workforce, there is still a significant gender pay gap at the detriment of women. In this industry, and the vast majority of others, this is because men take up the majority of the most senior roles, which are the highest paid.

Basically, in order to reduce the gender pay gap, we need to get more women in more senior and high-paid roles – and fast.

Prime Minister Theresa May said, “It seems extraordinary to us that women 100 years ago were not only denied the right to vote but had to fight so hard for it. It is our job to make sure that it doesn’t take another 100 years for the gender pay gap to become a thing of the past.”

While pay equality is clearly morally right and fair, Mrs May’s colleague, Home Secretary Amber Rudd highlighted that equality actually “makes sense for everyone” – McKinsey estimates that bridging the gender gap could add £150 billion to the UK economy by 2025.

Do you know what the gender pay gap situation is in your place of work? In a recent Forward Ladies poll, 51% of women didn’t even know where or how to access their employer’s gender pay gap report. Knowledge is power!

Let us help you – if the company where you work employs over 250 people, you can find the information you need here.

Once you’ve accessed the data for your employer, you may be disappointed by what you find. However, don’t get angry – get equal! There are a number of things that you can do to create a better pay environment, not just for yourself, but for the hundreds of women who will enter the workforce behind you in the years to come.

For more tips and advice on negotiating a pay rise, see our articles HERE and HERE.

If you are in a position to do so, identify and sponsor promising female talent, so that in the future a higher percentage of those senior and more highly paid roles will be filled by women.

Forward Ladies have created a guide to help you take action to close your personal pay gap – sign up for our newsletter HERE and get a copy of your FREE guide today.