What If I Fall? But Darling, What if you Fly? - FL
The mother of all awards is LIVE Learn more & apply!
×
× Close

Not many entrepreneurs would say, “I owe my success to a broken hairbrush.” Yet this is precisely where the idea for Rebecca’s blow-dry brush kit, CurlME – the first product of her Pro Blo brand – came from.

A self-confessed “blow-dry addict”, Rebecca spent most Saturday mornings in a salon getting her hair professionally dried and styled. “It wasn’t the cheapest indulgence,” she says, “but back then, I felt it was impossible to recreate a salon blow-dry at home. Not that I didn’t try!

“One day, my ceramic brush broke. I clipped it into my fringe while drying the hair around it, hoping it would still produce the same result. It did – and that’s where Pro Blo’s story begins.”

Rebecca then created CurlME – a detachable blow-dry brush kit. She felt other women would also want to save the time and expense of a salon visit if they could create the same results for themselves at home. “I think all women want to look and feel good, and having great hair is integral to this. Not everyone has the time to sit in a salon, or they may not have the disposable income to do so on a regular basis. I saw this as a real gap in the market, and I knew I could make Pro Blo into a luxurious yet affordable brand.”

She invested her £20k savings into launching the business, which went into basic set-up costs and stock. “The cash ran dry very quickly,” she recalls, “which meant early sales via the website were crucial if the business was to succeed past the start-up stage.”

Rebecca experimented with different methods when it came to marketing her CurlME kit. She quickly found there was no right answer or magic route to sales. “It was a case of trial and error, and while some strategies worked, there were as many that fell flat. Over time, I learned that true marketing is much simpler than experts would have you believe: it’s simply knowing who your customer is and where they can be found, and understanding why they’d buy your product. It doesn’t matter what you’re selling, as long as you know the answers to those questions.

“Social media has been at the centre of our marketing from the beginning, as well as being paramount to our growth. That said, we don’t rely on it, as online algorithms change all the time, which can impact traffic to the website. We make sure we have a mix of online and offline campaigns running at any one time.”

Rebecca used Instagram as one way to garner interest from customers. While this initially proved successful for the Pro Blo brand, she feels it became less synonymous with the platform and other similar ‘Instabusinesses’ once Selfridges came on to the scene. “They contacted us via an Instagram direct message around four months after we started out. I was so convinced that one of my friends was playing a prank on me that when they called the office to speak to me, I hung up on them! I’m still mortified about that. Luckily, it didn’t put them off, and we had a proper CurlME launch at Selfridge’s Trafford Centre branch. That was quite a moment.”

As the product is predominantly sold online, Pro Blo’s business model features low overheads as well as plenty of scope for new markets, both of which contribute to the company’s growth. In 2017, Rebecca outsourced the company’s warehousing facility, which further boosted Pro Blo’s ability to scale up. Their products appeared in Harvey Nichols, ASOS and similar retail brands. Celebrities, bloggers and brand influencers whose online followers are hundreds of thousands across the globe have been keen to endorse and feature Pro Blo.

One of Rebecca’s hurdles – certainly during the early days – was growing too fast. “Having money for stock that might sit with a retailer for nine months before we received a return has always presented a challenge. However, I always try to focus on what I can do about something rather than what I can’t; instead of crying over a lack of cash, I focus on how to make more. It means I have to deal with everything in the moment, but I’ve got through tough times before, and doing so makes further issues less of a worry.”

Rebecca also uses Quickbooks to help her keep on top of finances. “It’s super-simple for someone like me who is not an accountant, and it allows me to monitor our cash flow any time of day, any day of the week.”

Rebecca doesn’t see herself as an entrepreneur, as the image she conjures up when imagining such a person is a high-flyer with a life of luxury. She says the reality, for her, is very different: “Despite the sleepless nights and the moments that make you question why you’re in business, I honestly love what I do. Pro Blo isn’t just a business; it’s a part of me, a part of my life. I don’t actually feel like I have a ‘job’.”

This was her driving force from day one: to make money from doing something she enjoyed. Her vision has shifted a little since then: she now measures the company’s success by its reputation, and how much Pro Blo products are loved and respected within the beauty industry: “On a personal level, I work towards achieving balance in all areas of my life. There’s a lot to be said for waking up every day and feeling excited about what lies ahead.

“Some people make good money as they head to the office every day, but few feel a real passion for what they do. The freedom to shape your life and the opportunities that come from running a business are not things money can buy.”

Rebecca’s favourite quote consists of rhetorical questions: “What if I fall? But, darling, what if you fly?” by Erin Hansen. She says, “I apply this to everything, because if you never take chances, how will you ever grow? I look back over the time I’ve been in business, and I know I’ve made many errors. But I had no real guidance, so it was inevitable.

“On the flipside, I honestly believe that had I been told all I know now, not only would I have not got to where I am, I would have probably run a mile. We learn more from our mistakes than our successes. I know that I’ll always be a work in progress, but I’m okay with that.”

Rebecca spends a lot of her time travelling, particularly to London as she is based in Liverpool. It’s no surprise that her favourite days are those spent at the office. “I don’t get to spend half as much time there as I’d like. I used to love travelling, but now I really appreciate routine and normality.”

Rebecca’s day begins at 5am. She initially checks her emails, although she often liaises with Pro Blo’s clients in China, knowing that this time of day is much more convenient for them. She then heads to the beach with her dog for a brisk walk, which helps her to focus on what needs to be done that day. “I use this time as a form of meditation. A full hour with no phone contact, no social media, no emails to answer – just me, my pup and the beach.

“I get to the office around 8am and spend the morning in meetings or catching up with my operations manager. I see myself as hands-on, whereas my team would probably describe me as a control freak! I just want to be up to date with all aspects of the business.” Lunch is usually spent with her social media manager, or with the head of marketing, discussing campaigns and concepts. Afternoons are no less busy. Then she heads home around 5pm.

Winding down after work can be a battle for anyone in today’s always-switched-on world. How does she cope with this? “I’ll admit, it is difficult to put your phone down when you can access your entire business on it. At the end of the day, it’s a tangible object I can choose to put out of reach. And while I have experienced periods of stress and being overwhelmed, they don’t last long.”

It’s clear that very little gets this girl down. And should Rebecca ever need a little pick-me-up that will make her look and feel a million dollars, we know just the thing …

The high and low points in her entrepreneurial journey:

“Two years in, we appeared at a trade show in London. Some friends had come to support me, which was a godsend, given that our stand was swamped the whole day.

“I remember filling a shelf with stock, and when I turned back again it was empty. I looked around and we were all dripping with sweat: we’d not stopped at any point during the eight hours. That was when I thought, ‘Wow! We really have something here’. I’d like to say we went out afterwards and celebrated but, as soon as the show finished, all we wanted to do was crawl into our beds!”

“I don’t have one, simply because I don’t regret anything I’ve done or any decision I’ve made. They’re not ‘lows’, they’re lessons. What I will say is that there have been times when I should have trusted my gut. People with more experience and knowledge than me imparted advice that I (silently) disagreed with. I went through the motions anyway, even though I knew it was the wrong decision. As your confidence builds, you’ll find this will happen less and less.”

“My dad always says, ‘Find something you love, and you’ll never work a day in your life.’ A wise man indeed!”

“Remember what you wanted when you started out. It’s so easy to become so consumed with hitting the next goal, then the next, that you forget just how far you’ve come. As a team, we acknowledge and celebrate every success. The little moments make the big ones, after all.” 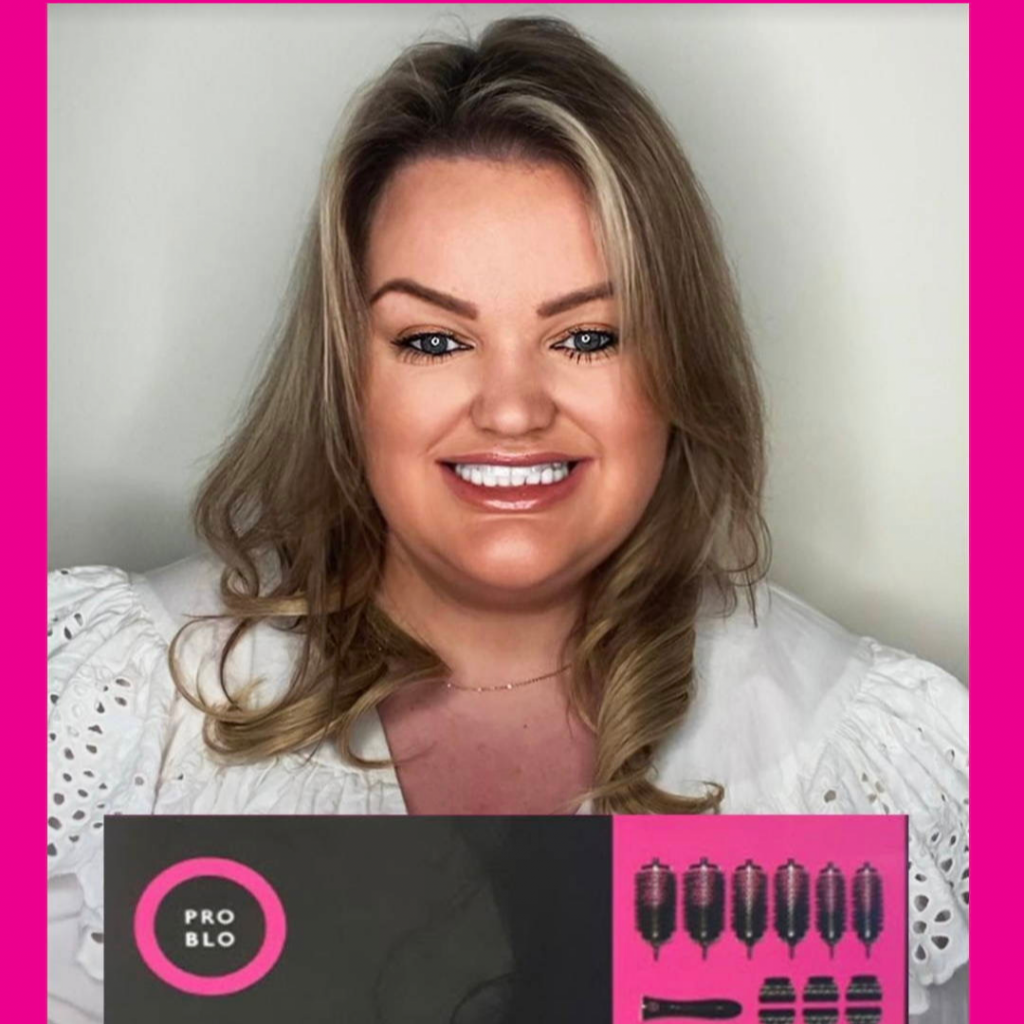 Join us live on Instagram, 15th March 2022 at exactly 12:30 pm for an inspiring interview with our CEO, Griselda Togobo, and CEO of Pro Blo group, Rebecca McCann. 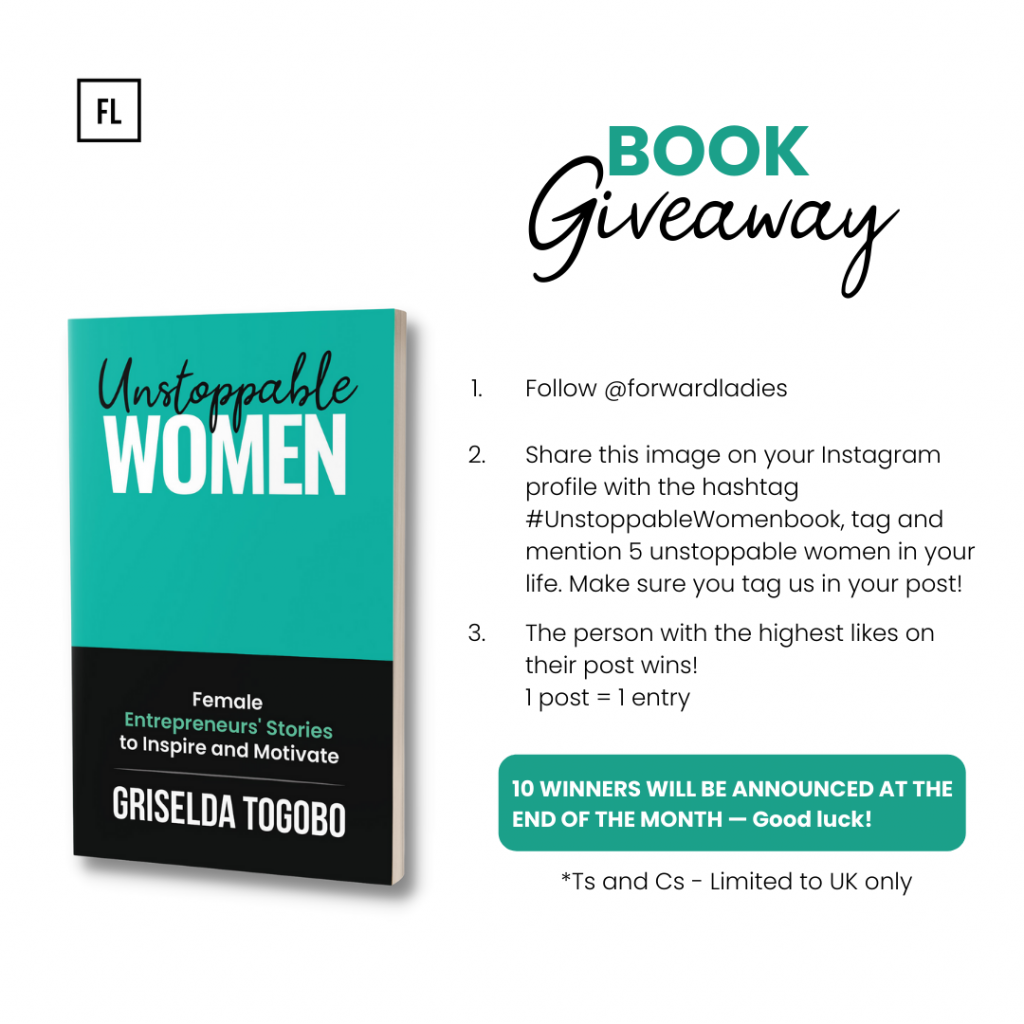 Get the Ebook
get the paperback

Did you miss the book launch on the 8th of March? Watch a replay on our channels below: